> Blog>Category>ARNE JACOBSEN AND THE SAS ROYAL HOTEL IN COPENHAGEN

ARNE JACOBSEN AND THE SAS ROYAL HOTEL IN COPENHAGEN

The Sas Radisson Hotel was ordered to the danish architect and designer Arne Jacobsen by the danish airlines Sas, hypermodern in its architecture and its precursor concept of an all design hotel, it allowed the designer to create ones of his most reknown pieces such as the Egg and Swan chairs.

The Sas Radisson Hotel was designed by Arne Jacobsen in 1956, it has been deeply inspired by the light architecture of the "lever house" in New York designed by Gordon Bunshaft  and Nathalie de Blois, that one has an international style and was created according to the design's principles of Ludwig Von Der Rohe.

As the lever house, The SAS radisson Hotel is conceived as a glass box or as you might say a "house of card" but within changes of proportions and materials as well as added details wich reflect Arne Jacobsen's great aesthetic sensitivity. The Architect/ Designer has covered the facades with aluminium and green and green grey tainted glass wich reflects Copenhaguen's sky and clouds. A poetic tuch wich allows him to integrate the highest building of Denmark then, in the rather flat environment of Downtown. 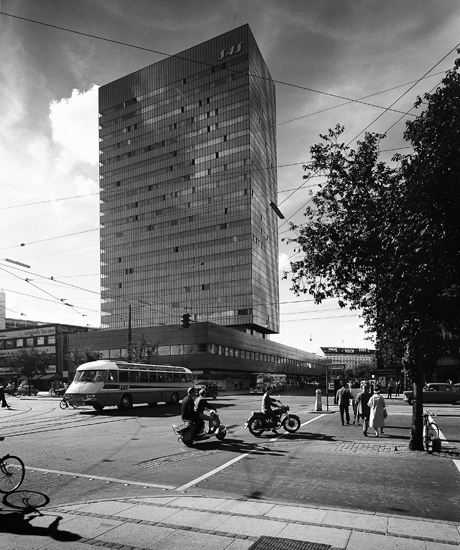 Arne Jacobsen works then on the interior design, he will draw almost everything, from equipement to furniture, from lightning to textile and accessories such as cutlery. In the first and precursor Design Hotel of the world, where design prevails almost everywhere, one color predominate, green, one style, the organic one. Arne Jacobsen who worked as a Landscaper some years before, keeps in mind a modern and polymorphic garden, therefore most of the furnitures will be upholsterd by geen fabric and made with simple materials.

Among the furnitures created for the Sas Radisson Hotel are the famous "Swan" and "Egg chair" (its armchair version), created under an organic concept where the seact, back and armrest are made of the same continuous shape in one single piece: a molded polyurethan shell.
Functional above all, they are realized with a great economy of materials and rationality of construction wich facilitates their industrial production end their
daily use. 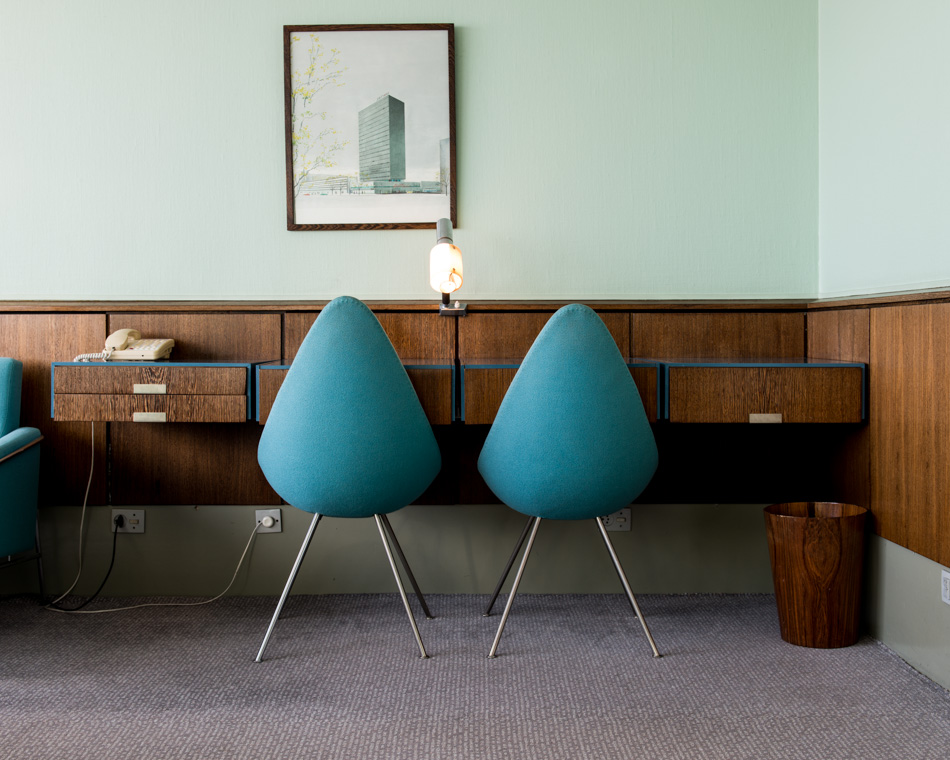 The "egg chair placed in the Hotel lobby had a backrest high enoughf to serve as a cocoon and a protection to the immediate surroundings, bringing a feeling of security and well being.
Its is the harmony of opposite and extremes, the hypermodern and aerial architecture opens on the round soft and organic shapes of the interior design,
the strongest interior architectural exemple is the spiral staircase of the lobby. 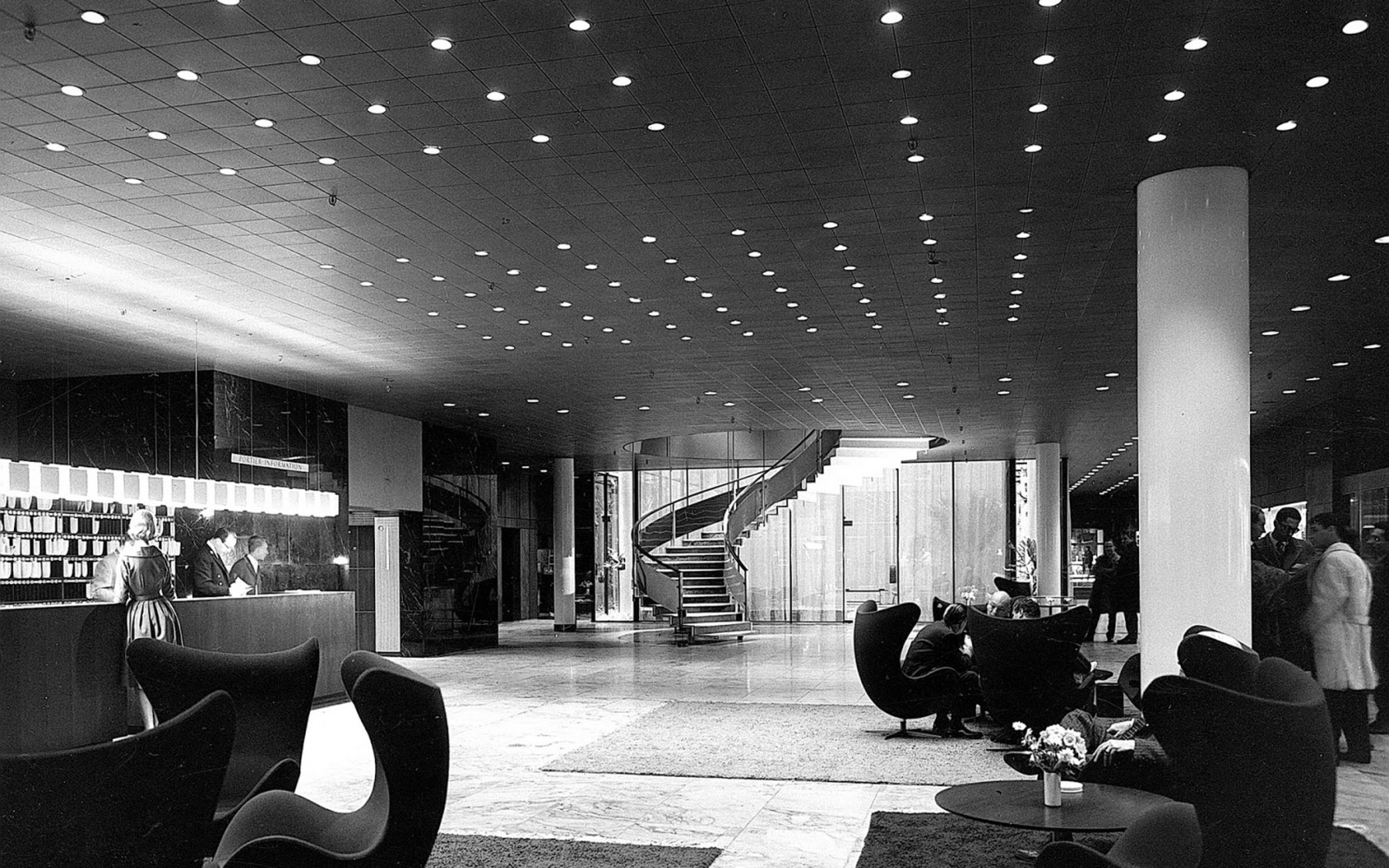 With the conception of the Sas Radisson hotel starts laboratory of creations that will become for some of them, such as the aformentioned "Egg"or "Swan" chairs or even the "Drop", design icones ore more     said Modern classics, therefore we can consider  the Sas Radisson Hotel as the "Gesamtkhunstawerk", The masterpiece of Arne Jacobsen. 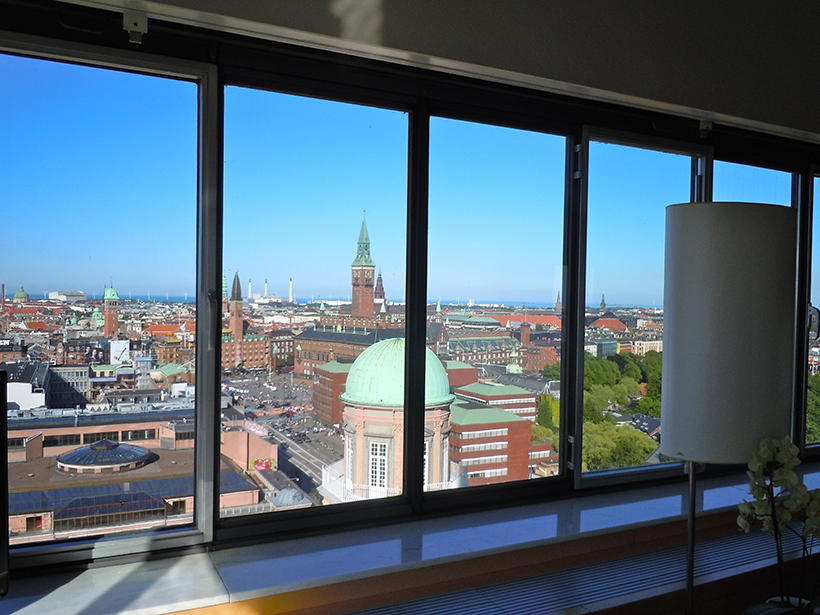 WIEW FROM THE RADISSON BLU ROYAL HOTEL ON THE TIVOLI GARDENS

The hotel has been renamed the Radisson Blu Royal Hotel since, altough it is still furnished with Jacobsen's creations, the hotel and furnitures have been brought up to today's taste, an original room has been kept as it was, the room 606.