The Finn Juhl's house concieved by himself in Charlottenlund near Copenhagen allies light, shapes , materials and colors in perfect harmony.

Brilliant student from the Beaux-Art Royal Academy of Copenhagen, Finn Juhl starts working as a studio assisstant for the renown architect Vihelm Lauritzen in 1934.He will help him with two of his most important projects,the one for the new house of radio of Copenhagen the "Radiohus",which will be worldly aclaimed, and the one for the airport of this same city.
With the contribution of Vino Borden, he will be in charge of the interior decoration of the radio house and will later on become the closest collaborator of Vihelm Lauritzen for fourteen years long. 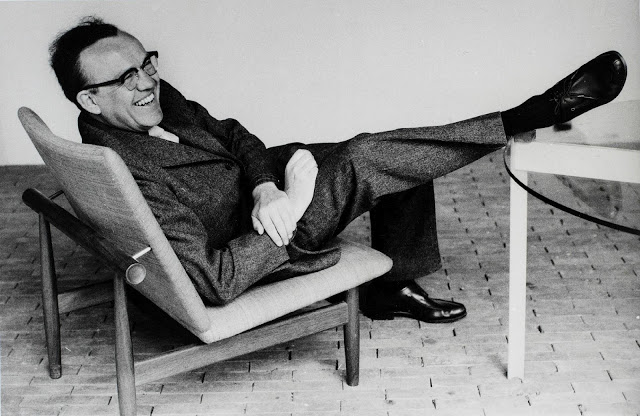 He starts presenting his art starting from 1937 and opens up his own studio in 1945.
Studio where he produces his own creations and specialize himself into interior decoration and furniture design with the collaboration of the cabinetmaker Niels Vodder (who will ensure his productions during almost 20 years) Finn Jul will,without a doubt, is the most controversial designer within his pairs Børge,Morgensen or Hans. J Wegner.

With a less classical style, his furniture made of sculptural shapes and sensual curves look more like artworks of art than simple functional furnitures, his work seems devoided of any practical constraint.This is only an appearance as most of his furnitures and seats are very hard to produce and will require the collaboration of an extremly talented and skilled cabinetmaker such as Niels Vodder to be brought up to light.
The "Bone Chair", inspired by the curves of the « Art nouveau » will only be produced in 12 exemplaries at that time because of its skeleton structure and it's invisible assembly. Fin Juhl is a singular designer, anti conventional he is ahead of his time. He will work on the construction of his house as soon as 1942. It is constructed on a 1700m2 field located at the entrance of the Ordrupgaard parc in Charlottenlund. 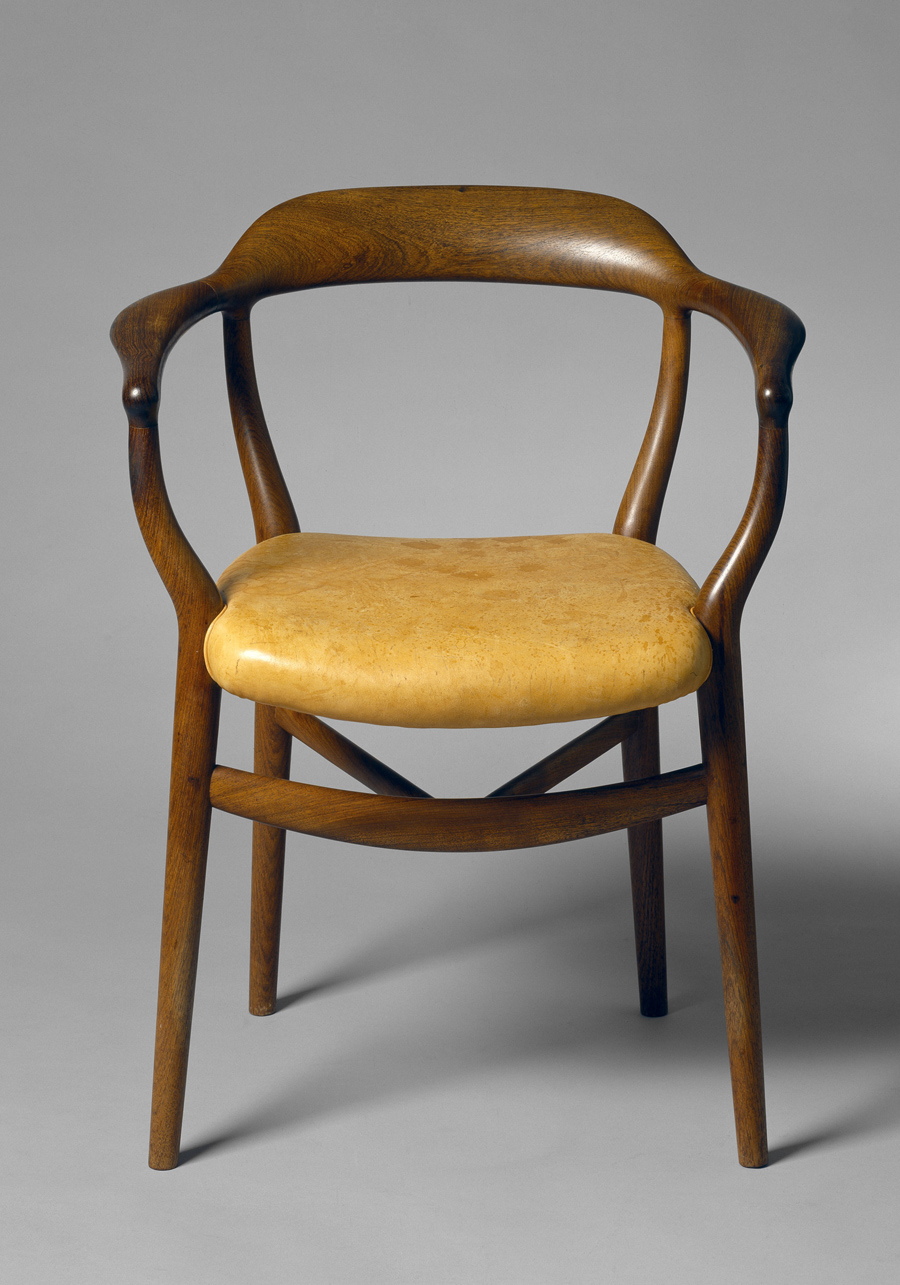 The designer/architect concieved his house from the inside to the outside, he mainly seeked for a perfect equilibrium between the colors, the materials and the interior volumes. If the facade represent a secondary role for him,Finn Juhl takes great care of the direct influence of the interior and exterior environment, naturaly according to the natural light that enters through the large windows wich opens on the garden and it's trees. The full house is composed by two blocs linked by an entrance painted in blue. The interaction between the materials and the colors is mainly organized around the furnitures made by the designer and his artcollection. The selected arworks plainly participate to the interior architecture and its harmony. 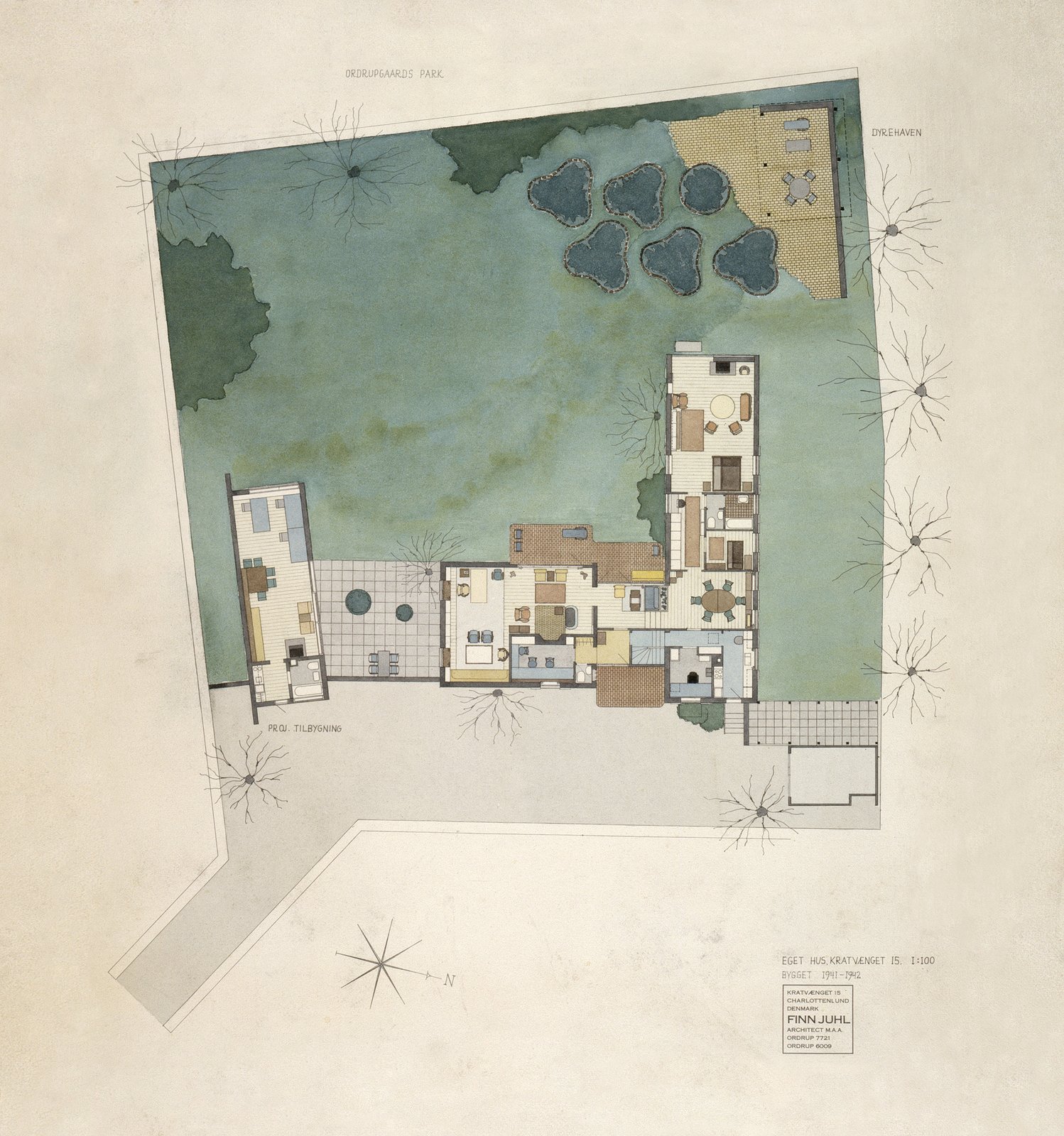 THE HOUSE PLAN AND ITS INTERIOR ORGANIZATION

In fact, color plays a major role in the Finn Juhl design, he uses vibrant colors,not only for his furniture, but also for the rooms of his house, each room has a diferent colored ceiling.
Finn Jul,creator and eclectical individual collects art pieces mostly modern and contemporary works. Among them are principaly encountered works from cubist painters, either Danish and French artists who often exhibited in Denmark and had a certain popularity such as Manessier and Estève. 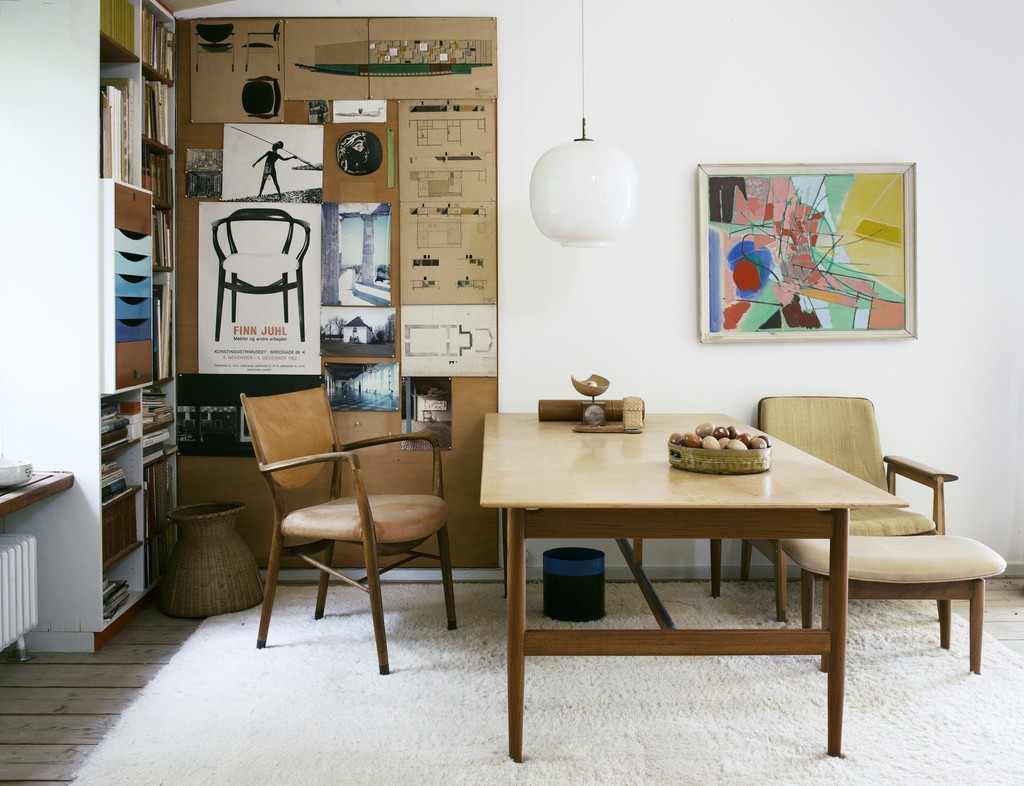 Their mantra:Form,color, shapes and their organisation before anything else. Danish painters are fully present with paintings from Lundstrom Vilhelm's, the master of Danish cubism,with Asger Jorn leader of the Cobra movement and the sculptures of Svend Wiig Hansen between others.
The organic design of Finn Jul and the colors used for its furnitures make echo and freely answer to the composition of the artworks displayed in the house as well as his beatifull sketches and watercolors. In fact,Finn Juhl is also greatly inspired by sculptors such as Hans Arp (especially for the Pelican chair) Henry Moore and others..The portrait of Hanne Wilhelm Hansen,1946 by Vilhelm Lundstrom next to the living room's door opens on the garden's room,which refers to the Japanese chair, who possesses a seat in the same shades.

Also found in the living room the "Chieftain" chair is one of the the masterpiece of the designer, with a design inspired by old weapons wich perfectly combines with a Jean Deyrolle painting at its right side. 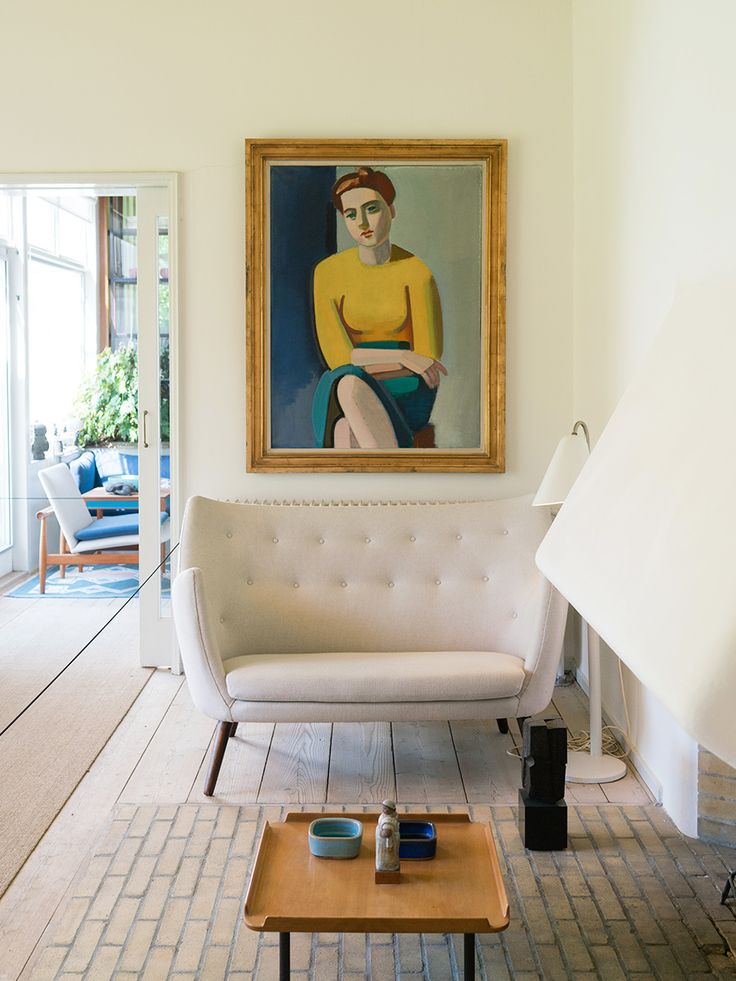 The shape and colors controled to be expression,guide and language at the same time.